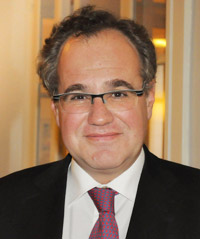 A key stakeholder in the country’s economy with an estimated 5.9 billion euro contribution creating over 222,000 direct and indirect jobs, brewing and beer in Spain also contribute to the European heritage with Mediterranean consumption patterns characterised by moderate drinking, sociability and the association of beer with food.

Sharing with Brewer Delegates from 28 European countries his commitment to help The Brewers of Europe build upon his predecessor’s achievements, Carceller said: “The Brewers of Europe vision to shape a beer friendly, smart and prosperous EU business environment is not only noble, but also very concrete. Following the example of my predecessor I will strive to ensure that Europe’s brewing sector, with its unique mix of enterprises of all sizes, pursues its dynamic and pro-active participation in the current battles in and for Europe”.

Saluting the election of his successor, Alberto da Ponte, recently appointed President of RTP - Rádio e Televisão de Portugal said: “I am leaving The Brewers of Europe in the best possible hands. Demetrio Carceller runs one of the main breweries in Spain and has the necessary European vision, optimism and pragmatism to lead The Brewers of Europe throughout the present, global economic turmoil”.

“We all have a part to play for prosperity and well-being, brewers included”, Carceller added.