As European Parliament debates the role for the EU in addressing alcohol misuse, The Brewers of Europe reiterates its support for the current EU Strategy against alcohol related harm 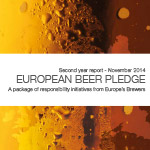 Brussels, 29 January 2015 - Following this morning’s debate in the European Parliament on a Draft Motion for a Resolution on the EU Alcohol Strategy, The Brewers of Europe reiterates its support for the current EU Strategy to support Member States in reducing alcohol-related harm.

The external evaluation of the current EU Strategy was extremely positive, concluding that the priorities and approach remained relevant, whilst also proposing a strengthening of the existing mechanisms. The Brewers of Europe supports this call for a reinvigoration of the current strategy rather than a totally new approach.

The current EU Strategy focuses on alcohol misuse, addressing the problems caused by harmful drinking patterns and targeting the vulnerable minority who either drink to excess or should not drink at all. Moderate beer consumption by healthy adults can be fully compatible with a balanced lifestyle, highlighting the importance of promoting responsible drinking behaviours.

The Brewers of Europe has supported this Strategy throughout, not just through words but also through actions, having filed one third of the 300 commitments to action made in the EU Alcohol and Health Forum.

The beer sector also reaffirmed its commitment in 2012 with the adoption of a European Beer Pledge that focuses on consumer information, marketing self-regulation and campaigns against alcohol misuse. The second annual report on the roll-out of the Beer Pledge was published in November 2014 and independently assured by KPMG.