High excise taxes on beer can be self-defeating 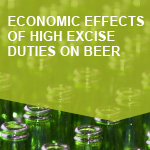 The EU Single Market is working and encouraging competition between Member States, with the high price of beer in several high tax countries leading consumers to seek out more affordable alternatives in neighbouring countries.

A new study by EY and Regioplan Policy Research analysing the economic impact of high excise duty rates shows that consumers are exercising their legitimate right to purchase beer where taxes (and prices) are lower. Customers may then find that their disposable income goes further in these lower tax countries, encouraging them to spend on a broad range of items. The main conclusions of the study stem from a consumer survey  conducted by Ipsos Interactive Services among 3200 consumers in the Nordic countries (Denmark, Finland, Norway and Sweden).

The high excise duty rates in the Nordic countries have led to multiple negative economic consequences in those higher tax countries. As this legitimate cross border trade grows it undermines the governments’ revenues and policy objectives and has the unintended consequence of disadvantaging local business. High taxes for beer also create an environment which encourages illicit trade, further reducing tax authority revenues.

In short, high taxes on beer can result in:-

The Brewers of Europe encourages higher tax countries to reflect on these challenges when setting excise rates and adopt a policy that seeks to reduce taxation of beer.