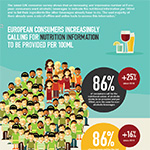 Brussels, 26 September 2016 - In 2016 many beer brands started the process of updating their labels and online information platforms and, by the end of 2017, over half of the beer brewed in the EU will carry ingredients and nutrition information. This follows the March 2015 commitment by The Brewers of Europe to voluntarily go beyond current EU legislative requirements for such declarations, which exempt alcoholic beverages of more tha n 1.2% ABV (alcohol by volume).

“Brewers are immensely proud of the beers they brew and the ingredients used to produce them,” said Pierre -Olivier Bergeron, Secretary General of The Brewers of Europe. “We want Europe’s consumers to know the ingredients in beer and how these beers can fit within a balanced lifestyle.”

“Brewers already label the alcohol content on their beer brands,” he explained, “but we also agree with consumer groups that citizens would benefit from having access to the ingredients and nutrition information, allowing them to compare like-for-like facts with all the other beverages available to them, both non-alcoholic and alcoholic. Of course, that will only be possible when equivalent information is provided on other alcoholic beverages.”

This transparency initiative is designed to present the facts to an increasingly eager audience: according to consumer research(1), 86% of Europeans think drinks producers should provide both the ingredients and the nutrition information. It is a central part of the overall consumer information drive in the European Beer Pledge that aims to promote responsible beer consumption as part of a balanced lifestyle.

The Brewers of Europe are determined to help their customers make informed drinking choices and their choice to be ahead of the curve in providing information is also well informed: pan-European consumer research shows that a vast and growing majority of European consumers believe they should have access to the same nutrition information per 100ml for alcoholic beverages as are available for any other food and drink product. GfK’s report also highlights that, though levels of interest in the ingredients and energy value vary from country to country, consumers widely welcome the possibilityof accessing the information online as well as offline.

“When it comes to ingredients and nutrition, our overall aim is that we wish to have well -informed consumers,” added Mr Bergeron. “Fulfilling this wish also means going beyond labelling the products to utilising new technologies that allow consumers to consult the detailed, tailored information that meets their needs. In the last five years, not only the usage of these new technologies, but also their capacity to provide accessible information, has grown exponentially.”

Beyond tailoring communication campaigns to suit country-specific audiences, Europe’s brewers have also launched an online quiz at beerwisdom.eu to inform and entertain drinkers across the region.

(1) Online survey conducted in April 2016 by GfK Belgium across nine representative EU countries (Denmark, France, Germany, Italy, the Netherlands, Poland, Romania, Spain, the United Kingdom) accounting for approximately 78% of the total European population. The research found that whilst 69% of consumers in 2014 believed the same nutrition information per 100ml should be

Based in Brussels, The Brewers of Europe brings together national brewers’ associations from  29  European  countries and provides a voice to support the united interests of Europe’s 6500+ breweries. The Brewers of Europe promotes the positive role played by beer and the brewing sector in Europe and advocates the creation of the right conditions to allow brewers to continue to freely, cost-effectively and responsibly brew and market  beer  across Europe.