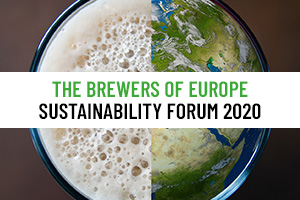 Over the last two days, over 700 unique participants have been taking part in The Brewers of Europe Sustainability Forum, an official partner event of the European Union’s Green Week. With brewers and value chain partners from across the continent joining policymakers for over seven hours of debate and discussion, the sheer numbers speak not just to the European beer sector’s interest in environmental sustainability, but also to their commitment.

For The Brewers of Europe, supporting the interests of over ten thousand breweries, this was the first bespoke event focused entirely on sustainability in the beer sector. Opening the Forum, Lasse Aho, President of The Brewers of Europe stated: “As producers of beer, we are central to a circular European economy and our progress goes hand-in-hand with the aims of the new European Green Deal.”

Against the backdrop of a Covid crisis that is putting livelihoods at risk and jeopardising the beer sector’s very connection to its consumers, through the closure of bars, pubs and restaurants, this was an opportunity to show that sustainability remains a priority and how brewers collectively can contribute to the Green Recovery. The Brewers of Europe Sustainability Forum demonstrated how micro, small, and large brewers have long encouraged sustainable practices in their brewing processes, in supply chains, and how beer can be responsibly enjoyed.

Speaking at the final session of the event, Rozalina Petrova, Member of Cabinet of EU Environment Commissioner Virginijus Sinkevicius, said: “Businesses are under a lot of pressure due to the economic crisis, but even in hard times, brewers are thinking about a sustainable future, improving environmental performance and bringing together all the elements: from production and agriculture to water use, residues and packaging.”

The Sustainability Forum’s four technical sessions discussed solutions ranging from harnessing geothermal energy, to returning nutrients to nature for increased biodiversity. The platform was given to brewers and value chain partners to present their projects for the benefit of the whole brewing community.

Paolo Lanzarotti, Board Member of The Brewers of Europe and CEO of Asahi Europe & International, said: "The event has been a unique opportunity to share. We need to work together, brewers large and small, and we need to act at scale. Europe can lead and must lead."

Innovation and collaboration were two major themes coming out of the Sustainability Forum.

“The event was useful for all stakeholders. There is a general trend in the brewing sector for innovation and an awareness of the Green Deal, with a lot of activity on this, especially the contribution from small brewers” said Ivan Štefanec MEP and President of the European Parliament Beer Club. “People are working toward the common objective of sustainability of the sector from a long-term perspective,” he added.

In his closing words Pierre-Olivier Bergeron, Secretary General of The Brewers of Europe affirmed the ambitions of the brewing sector by saying: “To the Commission and Members of the European Parliament represented here today, I want to say that we are your partners, committed to continuing our sustainability story – to leading by example in our sector and beyond.”

Further information about The Brewers of Europe sustainability story, and to re-watch the event online in the coming days, visit the dedicated platform at www.brewing4.eu.

Postponed from June to October by COVID-19 and challenged by on-going global uncertainty, a rearranged EU Green Week went virtual this year and had the main overarching theme of biodiversity. The EU Green Deal remains one of the six cross-sectoral priorities for the European Commission, relating to the UN Sustainable Development Goals that are important strategic ambitions across the world.

Based in Brussels, The Brewers of Europe brings together national brewers’ associations from 29 European countries and provides a voice to support the united interests of Europe’s 10,000 breweries. The Brewers of Europe promotes the positive role played by beer and the brewing sector in Europe and advocates the creation of the right conditions to allow brewers to continue to freely, cost-effectively and responsibly brew and market beer across Europe. Follow us on Twitter and visit our website.