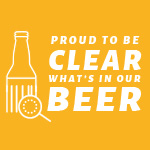 Brussels, July 5, 2021 – The Brewers of Europe has added its name to a new EU-wide pledge to support the shift towards sustainable food systems. The Brewers of Europe was one of the founding signatories at a European Commission ceremony today to launch the new EU Code of Conduct on Responsible Food Business and Marketing Practices.

Signing up in the presence of EU First Vice-President Frans Timmermans and the European Commissioners for Health and the Internal Market, The Brewers of Europe pledged to pursue and build upon our six-year commitment to label ingredients and energy on beers across Europe.

The Brewers of Europe Ambition is that by end 2022 all beer bottles and cans list ingredients and energy per 100ml on the labels, just as all other non-alcoholic beverages legally have to do and in full conformity with Regulation (EU) No 1169/2011 on the provision of food information to consumers.

While EU law currently exempts alcoholic beverages over 1.2% abv from a legal obligation to list the ingredients and calorie content, The Brewers of Europe is delighted to add its weight to the European Commission campaign for all consumers to have access to this information.

Indeed, at 93% and 86% implementation rates for ingredients and energy labelling respectively, Europe’s beer brewers are already well on their way to hitting their ambitious targets as part of the ‘Proud to be Clear’ campaign.

The Brewers of Europe Secretary General Pierre-Olivier Bergeron said that by signing the EU Code of Conduct, beermakers are showing they are ready to pursue their leadership. “Brewers want people to know exactly what goes into the delicious beers that they brew. When we provide people with clear information about our beers, we empower them to make the right choices. This is about responsible business and consumer choice”, he said.

The EU Code of Conduct for Responsible Food Business and Marketing Practices is a key pillar of the EU’s landmark Farm to Fork Strategy. It sets out how food and drink producers, processors, operators and retailers can voluntarily commit to improve and communicate their support for healthy, balanced and sustainable diets, including by providing transparent, voluntary product information to consumers.

In signing the Code, The Brewers of Europe support these aspirational objectives. We also pledge to publish the implementation results annually, promote the Code within our constituencies, and encourage and support brewers to continue and support delivery of the commitment.