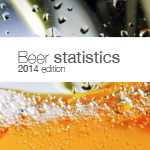 On the occasion of the relaunch of the European Parliament’s (EP) Beer Club, The Brewers of Europe published the 2014 European Beer Statistics, which reveal a brewing sector that continues to show signs of recovery, but still faces constraints to growth and investment.

The Secretary General of The Brewers of Europe, Pierre-Oliver Bergeron commented “Our new data show that, despite a further decline in beer consumption in the EU in 2013, direct employment and exports remained stable, demonstrating that global demand for European beer remains high.”

In 2013, the number of active breweries expanded to well over 5,000 and continues to grow, with brewers responding to Europeans’ growing interest in the diversity and variety of beer. The beer sector is also responsible for 2 million jobs across the entire value chain, with one job in brewing creating one in agriculture, one in packaging and logistics, one in marketing and other services, one in retail and eleven in bars, pubs and restaurants.

Bergeron added “One of the main challenges brewers continue to face is governments looking for short term solutions to the budget deficit, including through excise duty rises on beer. It is though interesting to note that, despite all the tax increases, beer excise duty revenues actually dropped in 2013. Thankfully, in 2014, a few countries have taken note of the valuable, long-term contribution a thriving beer sector can make to the overall economy, resisting the temptation to increase beer taxes or even cutting them to support a sector that creates jobs.”

Addressing the 350 people attending the launch of the EP Beer Club, Bergeron stated: “The latest Beer Statistics show that the shoots of recovery are real, but that we need the right regulatory conditions if we are to accelerate progress. I am therefore extremely encouraged to see so many people gathered here today. This already demonstrates awareness amongst Brussels policymakers of the importance of beer to Europe and of the role that they can play in supporting a responsible brewing sector.”

Around 40 MEPs attended the launch of the EP Beer Club, renewed for its 4th parliamentary term with a new President, German MEP Renate Sommer. Speaking at its re-launch, she announced:

"I am delighted to take over the EP Beer Club chairmanship for the current mandate. Beer has always been part of our rich European culture and it is of vital importance for our economy. The European Parliament is committed to do more for economic growth and employment. In order to support our enterprises we need to ensure that European legislation is feasible in practice. This would also support the brewing sector in fulfilling its potential and in successfully continuing its commitment to Europe."

The report presents key figures on the European beer market from 2013 and the trends since 2008 across 28 EU Member States, Norway, Switzerland and Turkey. With a breakdown per country, it looks at beer production, consumption, exports, imports, on-/off-trade split, direct jobs, numbers of breweries, beer excise duties and more.

The report is available on the NEW website of The Brewers of Europe, which now also features a country-by-country animated view of each beer market in Europe – www.brewersofeurope.org.

Founded in 1958 and based in Brussels, The Brewers of Europe unties the national brewers’ associations from 29 European countries. The European Union currently has over 5500 active breweries, which together create over 2 million jobs.

About the EP Beer Club

Established in 1995, the European Parliament (EP) Beer Club is a forum for discussion and information exchange around issues that affect the brewing sector within the European Union. The EP Beer Club believes that Beer is part of Europe’s heritage and tradition, and aims to support the responsible growth and stability of the brewing sector in the European Union. It offers a unique opportunity for MEPs to stay informed about the contribution made by Beer to Europe’s socio-economic landscape and cultural patrimony, and how this can be affected (or enhanced) by policy developments across the EU. More information at: www.epbeerclub.eu.