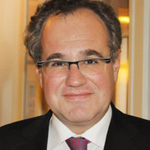 Demetrio Carceller, the first Spanish President of the association, will represent for a further two years a sector that contributes 52 billion euros to the European economy.

Brussels, 4 December 2014. The Brewers of Europe’s General Assembly has unanimously re-elected Spanish brewer Demetrio Carceller to represent the European association that federates 29 national brewers associations across Europe. The EU has over 5500 breweries, which together brew 38 billion litres of beer annually. In Spain, the EU’s fourth largest beer market, beer represents 1.4% of national GDP.

As President of Europe’s brewing sector, Carceller will continue the work of promoting the sector's contribution to the European society, culture and economy.

Beer generates over 2 million direct and indirect jobs in Europe across the entire value chain, with one job in brewing creating one in agriculture, one in packaging and logistics, one in marketing and other services, one in retail and 11 in bars, pubs and restaurants. Breweries directly employ more than 125,000 people in Europe but also create a further 1.4 million jobs in the hospitality sector, according to the latest report by Ernst & Young.

While the European context has been very difficult in recent years, beer exports increased by 11% between 2010 and 2013. It is also worth noting that, in spite of a decline, a third of beer consumption in Europe is still taking place in bars and restaurants, generating 76 billion euros in revenues in the hospitality sector - a positive sign.

According to Demetrio Carceller, President of The Brewers of Europe, "the contribution of beer not only has an important economic dimension, but also a social and cultural one, given its historical roots in the continent".

Carceller's re-appointment also highlights the importance of the Spanish beer sector to the EU’s economy and its food sector. In Spain, brewing and beer help create over 257,000 direct and indirect jobs, mostly in the hospitality sector, and generate an estimated 5.6 billion euros in tax revenues, of which around three quarters originates from consumption in bars, restaurants and cafés.

A key focus of the next two years of Carceller’s Presidency will be a further step up in efforts to actively promote moderate beer consumption and its place within a balanced lifestyle.

A hi-res photo of Mr Carceller can be downloaded here