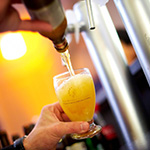 Brussels, 1 July 2015: The Brewers of Europe is proud to feature prominently in Food Drink Europe’s ‘Balanced Diets and Healthy Lifestyles’ report, which catalogues initiatives put in place by the food and drinks industry to promote and encourage consumers to adopt balanced diets and live healthy lifestyles..

Released today at the World Expo in Milan, as part of EU Food and Drink Week, this new multi-stakeholder report features, amongst other brewer-led initiatives on marketing self-regulation and social responsibility, the recent commitment by Europe’s beer sector to provide nutrition and ingredients information to consumers. Currently EU legislation exempts producers of alcoholic beverages over 1.2% ABV from the legal obligation to provide nutrition and ingredients information. Featuring alongside commitments by other food and drinks’ sectors, it is clear that ensuring well-informed consumers is now a key priority for Europe.

The commitment has received support from, among others, BEUC (the European Consumers Organisation), Eurocare and the EU Health Commissioner Vytenis Andriukaitis, following the Brewers’ announcement in Brussels and its subsequent presentation at the World Expo in Milan on the occasion of European Beer Day.

“EU Food & Drink Week provides an important opportunity to review the initiatives taken, by policy-makers, economic operators and other stakeholders alike, to promote balanced lifestyles. When it comes to alcoholic beverages, the beer sector is taking the lead and its responsibility seriously, by equipping consumers with the information they need on the ingredients used in brewing and the nutritional values of the beers put on the market. It is great to be part of a movement in the wider food and drink sector making similar commitments and to be working together as part of this report.”

European Beer Day included a programme of three panel discussions at the World Expo in Milan, involving speakers from Europe’s breweries, EU policy-makers and academic experts in the fields of nutrition, trade and innovation.

In addition to discussing the place for beer in a healthy lifestyle, panelists debated the role for beer in job creation and growth, championing the importance of nurturing innovation for the beer sector.

For more information about The Brewers of Europe’s commitment to consumers on ingredients and nutrition information, please see the following:

Founded in 1958 and based in Brussels, The Brewers of Europe unites the national brewers’ associations from 29 European countries to promote the interests of over 5000 European breweries.
www.brewersofeurope.org
Follow us on Twitter: @brewersofeurope