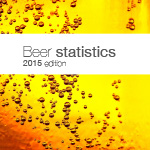 The Brewers of Europe today published the 2015 edition of its Beer Statistics, which looks at the key figures from 2014 and trends since 2009 across the 28 EU Member States.

“The 2015 figures are very promising and once again highlight how beer and its value chain are on the road to recovery following the 2008/09 economic crisis,” said Pierre-Olivier Bergeron, Secretary-General of The Brewers of Europe.

“After a very tricky period 2008-2009, since 2010 we have seen both consumption and production in Europe as a whole remain fairly stable, and the many new breweries opening in Europe demonstrate how beer is now playing its part in Europe’s economic recovery,”

The beer sector also remains a key actor in boosting job creation, a key pillar in the Europe 2020 Growth Strategy, and spurred on by an increase in exports which in 2014 rose to 8 billion litres.

“In 2014 we saw the number of jobs directly involved in the beer industry increase by 3.9% from 2013,” continued Bergeron. “This is highly significant, since each of these jobs generates further jobs throughout the value chain “from grain to glass” in areas such as hospitality, supply, brewing, and retail.”

“The opening of so many new breweries is not only a sign of the confidence and trust Europeans have in the sector,” continued Bergeron. “It also testifies to the enthusiasm consumers have for the diversity and quality of the product. This is the “positive story of beer” writ large and the future looks bright given this perspective.”

It should however be emphasised that the success of the beer sector is still largely dependent on supportive policies to enable brewers to compete both with each other and across borders, with the need for a sustainable and supportive taxation regime for beer, a common call from brewers across the continent.

Brewers are also more than happy to play their part in promoting responsible beer consumption, and in March this year, The Brewers of Europe launched a voluntary initiative from brewers across Europe to list ingredients and nutrition information for their brands, effectively implementing a scheme that is already legally required for non-alcoholic drinks. This shows brewers going beyond existing EU legislation to ensure that consumers receive all the necessary facts to make informed choices about the beers they purchase and consume.

Bergeron concluded: “The last year has shown Europe’s brewers both supporting the European economy and engaging in initiatives which benefit consumers. We are proud of what we have achieved, and look forward to 2016 with renewed rigour, enthusiasm, and confidence.”