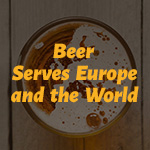 Brussels, 30 November 2016 - At their sixth annual Beer Serves Europe event this evening, The Brewers of Europe will be emphasising how their 7,500 breweries not only underpin economic growth in Europe but also make a significant contribution to trade with the rest of the world. Two new publications, the 180-country study Beer Connects Europe with the World and the 2016 edition of Beer Statistics, highlight how beer is accompanying Europe’s economic recovery and flowing increasingly towards fast growing areas of the globe.

Total consumer spending on beer was over €110 billion in the EU in 2014, an indication that a recovery from the 2008 crisis was in place. The latest statistics confirm that the European brewing sector is now firmly on the path to prosperity. Consumption and production are not just stable, but improving with year-on-year rises in European Union countries from 2014 to 2015 of 1% in consumption and 1.4% in production. Meanwhile beer is growing at the fastest rate among the top 10 food and drinks products in the EU by export value. Next year, at current rates of growth, beer will be up from 10th place to 6th place.

“The Brewers of Europe are proud of the major part they play in the European economy, generating considerable employment and boosting trade both within the EU and beyond. Supportive policies will enable brewers to continue contributing to the overall competitiveness of the European economy and sustained growth,” said Pavlos Photiades, President of The Brewers of Europe.

Beer is back for good

The European brewing sector is a key actor for job creation and the economy and is playing its part in supporting the delivery of the Europe 2020 Growth Strategy. Beer adds the equivalent of the GDP of Luxembourg, or around €51bn, annually to EU output and over €11bn in excise revenues for governments. The sector provides over 120,000 direct jobs in the EU alone, but nearly 95% of beer-generated employment occurs outside the brewing companies themselves: every one of these jobs is the catalyst for further jobs across the entire value chain, creating over 17 jobs in the wider economy, making a total of 2.3 million.

In addition to continued investment by Europe’s brewers in establishing European beer brands around the world, in 2015 European beer exports rose to 82 million hectolitres, an increase of 7% year-on-year. In 2008, exports beyond the EU accounted for 16% of the total. In 2015 the proportion has more than doubled to 35%.

A sure sign of confidence and trust in the sector is the continuous rise in new breweries opening across the EU since 2008 and the total has almost doubled since 2010. There were 588 new microbreweries established in the year from 2014 to 2015, a rise of 13%. The trend attests to the high level of consumer interest in the diversity and variety of Europe’s many different beer cultures.

Pavlos Photiades explains: “Europe's brewing sector is experiencing a Renaissance. Alongside the major global companies, medium-sized undertakings are demonstrating a tremendous capacity for innovation while smaller breweries are reaching out to new generations. The Brewers of Europe is home to all and we want all indeed to feel   at home. This is our roadmap for the next couple of years. Europe is the cradle of modern beer. I am greatly encouraged by the inventive ways European brewers are contributing to the vitality of the sector with the constant introduction of new styles and flavours.”

Beer is also unique amongst the main alcoholic beverage categories for its range of alcoholic strengths. Within the rich spectrum of choice the sector offers consumers, the market for non-alcoholic and low alcohol beers has doubled from 2000 to 2015. Beers below 3% ABV now represent around 6% of the overall European beer market, reaching 14% in some countries. They are proving ideal for occasions where people wish to a have a great tasting drink but either cannot, or do not wish to, consume more or any alcohol, for example before driving or when pregnant.

According to the European Commission, beer is affirming its place among Europe’s top export products, with double digit growth (+18%) in beer exports from 2014 to 2015. The top destinations are US, China, Canada, but over  the  past 20 years EU brewers have extended trade to 123 countries around the world. EU brewers are also among the  top three import partners of 97 countries outside the EU.

Average annual growth over 20 years of 8% has tripled the annual quantity of beer traded globally and these flows  can only increase: the European Commission predicts that 90% of economic growth in the future will occur outside the EU. The global beer network can be a good indicator of the openness of countries in facilitating knowledge, people and investment flows. European brewers are powerful world players leading the way in investing into emerging markets, contributing to growth and prosperity for both Europe and the world.

However, beer trading is more than economic exchange: it is an exchange of culture and prestige and a force for sustainable development in emerging countries. By setting up production locally, contract farming schemes and investments by the brewing sector generate a high level of employment, improve supply chain management and  raise grain productivity – while enforcing solid standards and human rights.

The success of the EU brewing sector relies on the EU connecting its internal market to the rest of the world. Brewers are also often well placed to lead the charge for fairness in trade agreements, calling for equivalent treatment of products and pushing for elimination of the type of tax discrimination that particularly affects small businesses.

The study Beer Connects Europe with the World was commissioned by The Brewers of Europe and conducted by the independent international engineering and project management consultancy Royal HaskoningDHV.

The 2016 edition of Beer Statistics was compiled from data collated by national brewers’ associations through surveys carried out by The Brewers of Europe and Eurostat.

Historical analysis is supported by information in The Contribution made by Beer to the European Economy, a report commissioned by The Brewers of Europe and conducted by Europe Economics, released in February 2016.

Based in Brussels, The Brewers of Europe brings together national brewers’ associations from 29 European countries and provides a voice to support the united interests of Europe’s 7,500+ breweries. The Brewers of Europe promotes the positive role played by beer and the brewing sector in Europe and advocates the creation of the right conditions to allow brewers to continue to freely, cost-effectively and responsibly brew and market beer across Europe.