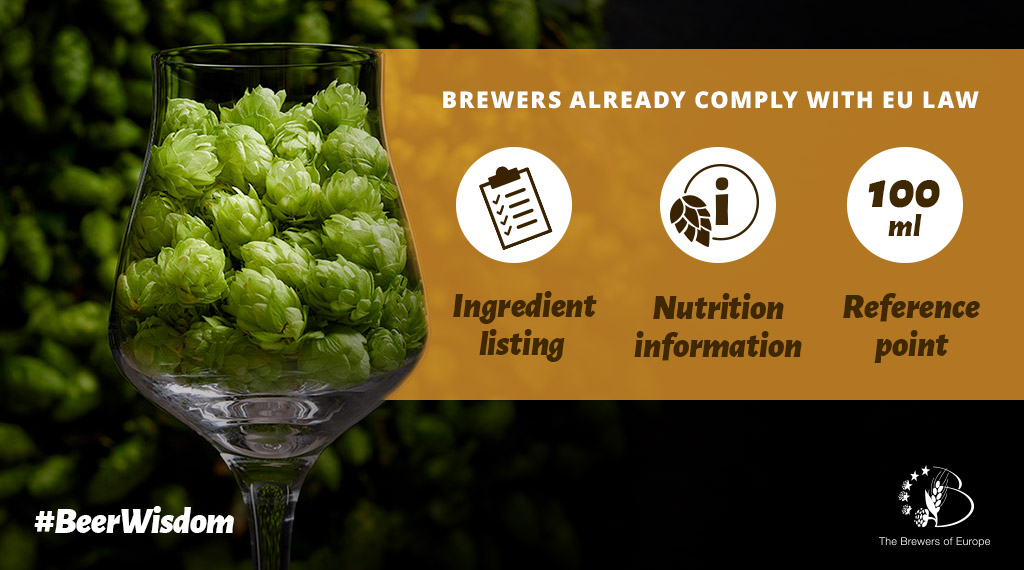 “The 100ml reference is laid down in the Regulation for all beverages, non-alcoholic and alcoholic, and widely understood by consumers across the EU as the robust standard for comparing the nutritional contents of different drinks. When there are anyway no standard portions for any alcoholic beverage across the EU, a solely portion-based scheme can never replace the 100ml reference,” stressed Pierre-Olivier Bergeron, Secretary General of The Brewers of Europe. “EU law in any case allows companies to add relevant portion size references, provided they are not misleading and are included alongside the 100ml reference.”

Following a public commitment made by The Brewers of Europe in March 2015, Europe’s brewers have been voluntarily rolling out ingredients listing and nutrition information across Europe, following the rules that apply to non-alcoholic drinks. We expect that by the end of 2017, over 60% of new beer volumes hitting the shelves across Europe will carry this information, on labels and also via online platforms, meeting the expectations and needs of today’s consumers.

We also encourage other sectors to follow our lead in providing both ingredients and nutrition values according to the rules, as it is clear that consumers can only be empowered to take informed decisions on how different foods and beverages fit within their diet and lifestyle if there is a level playing field of comparable information.

The Commission states that it will report back in one year on how alcoholic drinks producers are progressing with the voluntary roll-out of ingredients and nutrition information. This roll-out must be done against the rules as laid down in the EU Regulation. The Brewers of Europe is confident that the head start that we have given ourselves in doing this will stand us in good stead in this timeframe.

Based in Brussels, The Brewers of Europe brings together national brewers’ associations from 29 European countries and provides a voice to support the united interests of Europe’s 7,500+ breweries. The Brewers of Europe promotes the positive role played by beer and the brewing sector in Europe and advocates the creation of the right conditions to allow brewers to continue to freely, cost-effectively and responsibly brew and market beer across Europe.